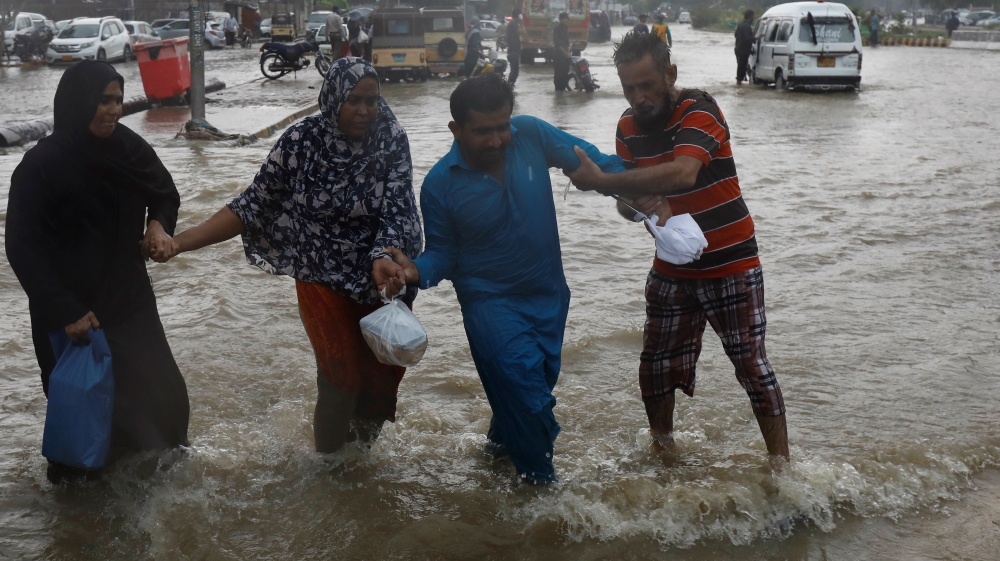 [Aljazera]’Overwhelmed’: No end to flooding woes as rains lash Karachi

[Aljazera]’Overwhelmed’: No end to flooding woes as rains lash Karachi

Islamabad, Pakistan – At least 13 people have been killed by urban flooding in the southern Pakistani city of Karachi, the country’s largest city and its commercial hub, as torrential monsoon rains have left large parts of the metropolis inundated and without electricity, officials said.

Those killed include people who have drowned in their homes, been crushed under collapsing walls or electrocuted by short-circuiting wires, Dr Seemin Jamali, the executive director of the Jinnah Postgraduate Medical Centre (JPMC), told Al Jazeera on Friday.

On Thursday, the city received more than 223mm of rain in a 12-hour period, the country’s meteorological department said, the highest seen in a single day since records began. More than 484mm of rain has fallen in August so far, according to the data, more than 10 times the monthly average.

“The havoc that has happened here from the inclement weather and the urban flooding has overwhelmed everyone,” Dr Jamali told Al Jazeera by telephone. “You would be shocked looking at the streets of Karachi. There is no way you can get out in that water.”

This was 26th street DHA Karachi, my neighborhood….this is why I was worried about my family, my father. What we have witnessed in Karachi today was apocalyptic in some ways. The true hurt & damage will be visible after the water recedes. Nothing but devastation. #KarachiRain pic.twitter.com/loWHBQ1rZC

Major roads and infrastructure across the city of 22 million people were flooded under several feet of water, with residents unable to reach hospitals and rescue workers deployed to attempt to save those whose homes had been destroyed.

“There was a lady who was in a wheelchair who drowned in the water from her own house, a 56-year-old lady who couldn’t get out of her own house because she was differently-abled,” said Dr Jamali.

As water levels rose, the city’s electricity utility company shut down power to large parts of the metropolis in order to protect citizens from electrocution from malfunctioning wires or other machinery.

Video footage showed roads and walls being washed away by the force of water in several areas, as the city’s drains and sewage channels overflowed from the volume of water.

Motorists abandoned their cars on major roads and were forced to walk, as many vehicles were washed away by the flooding water.

The collapse of infrastructure also affected landline and cellular telephone networks, which began to fail on Thursday as the volume of use rose, residents say. 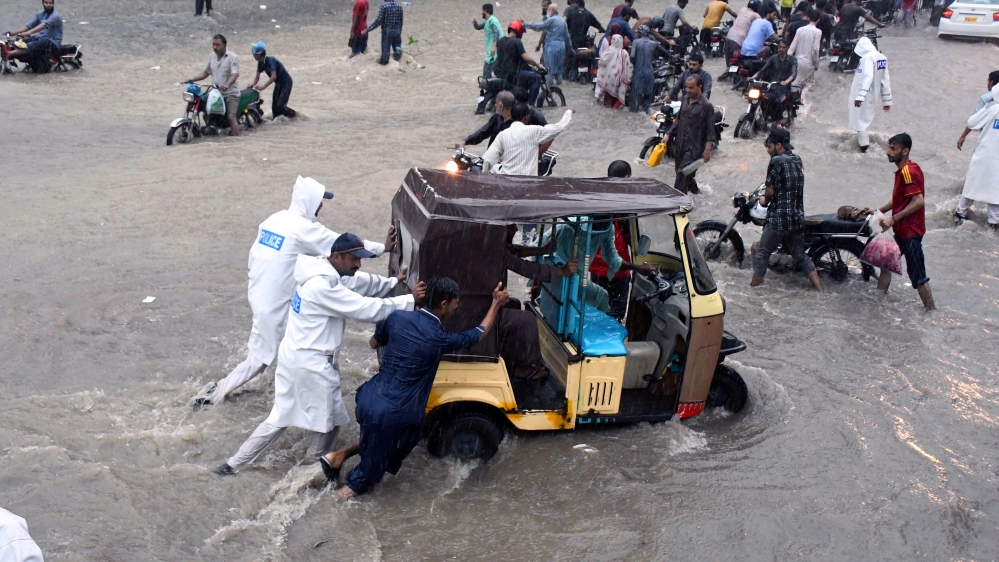 Since June, at least 106 people have been killed by monsoon flooding across Pakistan, according to the country’s National Disaster Management Authority [Muhammad Sabir Mazhar/Anadolu]

In a statement, the military said it had distributed more than 10,000 meals and begun work to shore up flood control walls along major water channels.

With the regular transport infrastructure inundated, rescuers were deployed by boat in working-class communities to help deliver the aid. Military helicopters flew overhead to survey the damage.

This year has seen record levels of monsoon rains across South Asia, with massive flooding in Bangladesh and India.

Since June, at least 106 people have been killed by monsoon flooding across Pakistan, according to the NDMA.

More rain is forecast for Friday, with the current weather system due to weaken over the weekend, Pakistan’s meteorological department said.

On Thursday, Pakistani Prime Minister Imran Khan said his government would “be announcing a plan for a permanent solution to the problems caused by floods by cleaning of drainage channels, fixing of the sewage system and resolving the huge challenge of water supply to the people of Karachi”.

Several proposals for revamping the city’s decrepit water drainage infrastructure have been made by national and multilateral development organisations such as the World Bank and Asian Development Bank over the last decade, but none have been taken up by the country’s government so far.