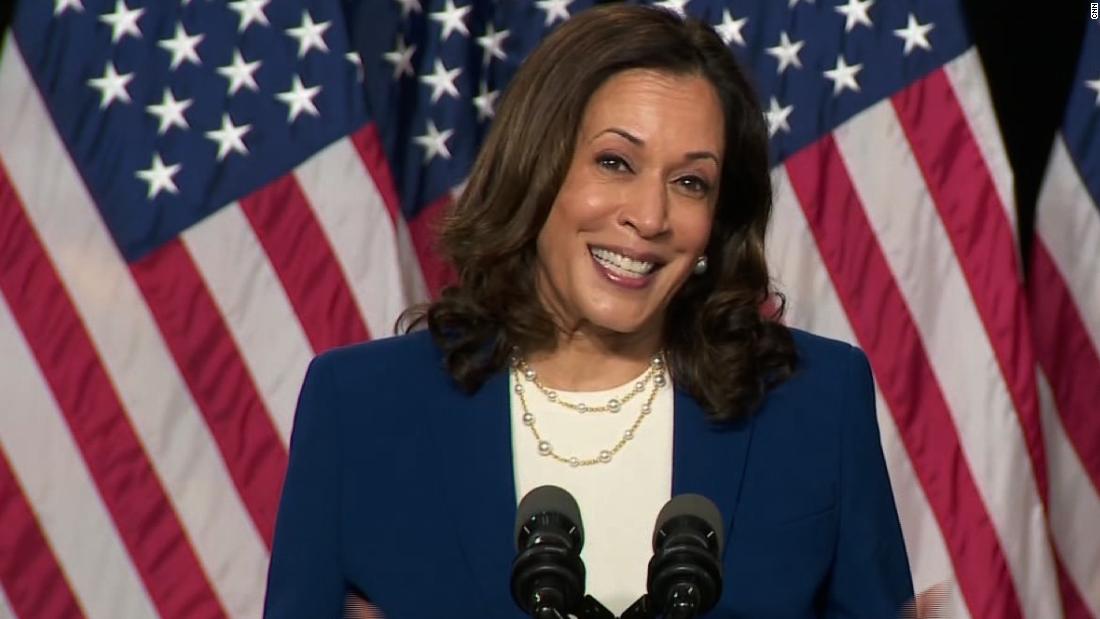 Indians around the world were quick to celebrate the news, and Harris’ meteoric rise has caused many of them to sit up, take notice and feel seen. To me, Harris is more than a woman who knows her mind, rallies behind important issues like marriage equality or immigration and grills powerful figures on the Senate floor. She’s someone to look up to. She’s also someone I can relate to when she talks with Mindy Kaling about storing spices in recycled coffee jars.
A photo of a young Harris wearing a sari, along with her comments about her late Tamil grandfather, have been widely circulated in India, and so far, the media attention she has received in the wake of the VP announcement has been overwhelmingly positive. This took me by surprise at first, since sexism often plays a prominent role in Indian media when it comes to the portrayals of female politicians and public figures. But several news outlets played on Harris’ first name with the headline “America Mein Khila Kamal” (“a lotus bloomed in America”), and an Indian politician called her VP nomination a “moment of pride for Indians.”
Having Harris in the White House would mean someone with a strong understanding of India might speak thoughtfully and critically on the Indian occupation of Kashmir, or the Indian nationalism that has marginalized the country’s 200-million-strong Muslim community, and led to a controversial citizenship law that excludes Muslim immigrants — issues President Trump has failed to meaningfully address.
It remains to be seen whether her position on the Democratic ticket will draw Indian Americans to vote for Biden in November. Asian Americans are the fastest-growing racial or ethnic group in the US electorate, making up nearly 5% of eligible voters in the US. While Indian Americans tend to vote for Democrats, President Donald Trump has made a concerted effort to court their votes.
With right-wing Hindu nationalism going strong in India, and ties to the US relying on a shared nationalist ideology, it is difficult to say where this nomination lands with Indian Americans right now. Trump’s partnership with Indian Prime Minister Narendra Modi has been well-received by both Indians and Indian Americans, and the “Howdy, Modi!” community summit in Houston attended by both leaders drew crowds of 50,000 people in September. In February, Trump traveled to India, and attracted more than 110,000 people at a similar rally called “Namaste Trump.”
Conservative Hindus have criticized Harris for not appearing at the “Howdy, Modi!” event and many others have made false claims that she has failed to acknowledge her Indian roots, questioning whether this has to do with “Hinduphobia” in the US.
While some may argue that the number of conservative Indian Americans is relatively small (less than 20% of Indian Americans are said to have backed Trump in 2016), Indian-American Hindus, in particular, may be growing increasingly conservative. The Trump campaign also launched a five-figure digital ad buy earlier this year targeting Indian Americans, who may be swayed by economic policies like tax cuts.

It’s hard to say whether these conservative Indian Americans will cross over to support Harris. For many of them, their stance on both Trump and Modi is ossified; as long as Trump backs Modi, and, by extension, the Hindutva, right-wing Hindu nationalism, on which Modi’s Bharatiya Janata Party runs, there is a union that appeals to them politically.

But this is where Harris’ roots and her commitment to human rights play to her advantage. To help Democrats build a bigger coalition, Harris should lean on her background and focus more on issues that are important to Indians and South Asians in America — an important demographic that often feels overlooked in US politics. She’s qualified to do so in terms of both her values and her background. While Harris’ stance on Kashmir, a majority-Muslim state quashed by Hindutva politics, is controversial to conservative Indian American Hindus, for instance, it may be a pull for Muslims and liberal South Asians — especially those who may feel alienated by Trump’s anti-Muslim rhetoric.
The vast majority of white Americans are clueless about the issues playing out among the Indian diaspora. In California, for example, the state’s Department of Fair Employment and Housing is suing tech conglomerate Cisco and two Indian employees for allegedly discriminating against an Indian engineer, who the lawsuit identifies as belonging to the lowest caste in India. Harris’ rise in politics is an opportunity to highlight conversations within the Indian and South Asian community and bring them to the foreground of American consciousness.

Harris, the daughter of two immigrants, is the manifestation of the American dream and a living milestone for many Indians. While her impact will ultimately transcend representation, it will be no small feat if she is the reason politically disengaged Asian Americans exercise their right to vote this November.