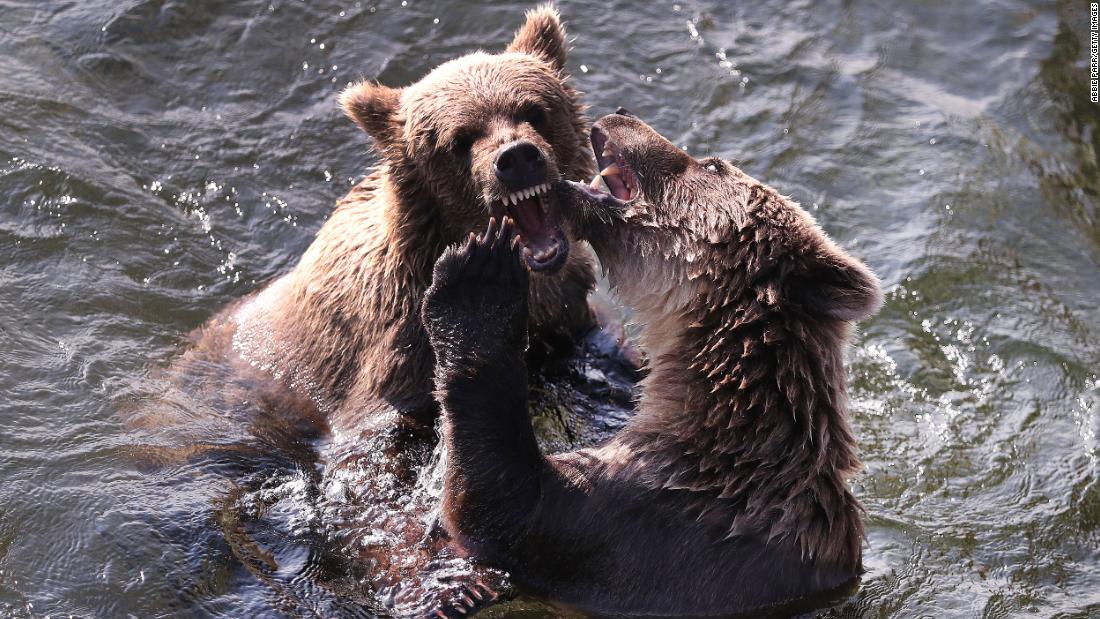 Michael Jennings, a pro rugby player with the Parramatta Eels, is tackled during a match in Sydney on Friday, August 14. Mark Kolbe/Getty Images

People in New Delhi wear personal protective equipment Monday, August 17, while carrying the body of a man who died from Covid-19. More than 50,000 people have died from the coronavirus in India. Only the United States, Brazil and Mexico had more reported deaths as of Thursday. Adnan Abidi/Reuters

An injured cow is moved by a helicopter Tuesday, August 18, because it was unable to take part in a cattle drive at Switzerland’s Klausen Pass. Urs Flueeler/Keystone/AP

Protesters in Greensboro, North Carolina, demonstrate in front of the home of Postmaster General Louis DeJoy on Sunday, August 16. Postal Service workers started sounding alarms earlier this month after changes instituted by DeJoy caused delivery service delays. With millions of Americans expected to vote by mail amid a pandemic, the massive delays lead to outcry from Democratic and Republican lawmakers who were concerned about ballot access and vote count. On Tuesday, DeJoy reversed course and said that changes being made to the Postal Service would be suspended until after the November election. Logan Cyrus/AFP/Getty Images
Former US President Barack Obama is displayed on a monitor in New York as he speaks in Philadelphia for the Democratic National Convention. During his speech Wednesday, August 19, Obama excoriated President Donald Trump as incapable of handling the responsibilities of the office. “I did hope, for the sake of our country, that Donald Trump might show some interest in taking the job seriously; that he might come to feel the weight of the office and discover some reverence for the democracy that had been placed in his care,” Obama said. “But he never did.” Jeenah Moon/Bloomberg/Getty Images
The sister of Ralph Malahi, a 23-year-old firefighter who was killed in the Beirut, Lebanon, explosion earlier this month, reacts as his coffin is carried at his funeral on Saturday, August 15. Chris McGrath/Getty Images
This aerial photo, taken Sunday, August 16, shows the wreckage of the MV Wakashio, a ship that ran aground last month and has been leaking tons of diesel and oil off the island nation of Mauritius. Stringer/AFP/Getty Images
President Donald Trump speaks during a campaign rally in Oshkosh, Wisconsin, on Monday, August 17. “The only way we’re going to lose this election is if this election is rigged,” he said during his speech. Evan Vucci/AP

Kathy Mathison looks at the still-smoldering wildfire that, just a day before, came within several feet of her home in Bend, Oregon, on Saturday, August 15. “You never think this is going to happen to you,” she said. Dean Guernsey/The Bulletin/AP

Thousands of people gather for an electronic music festival at a water park in Wuhan, China, on Saturday, August 15. The novel coronavirus was first reported in Wuhan late last year. Stringer/AFP/Getty Images

University of Georgia students move into their dorm Friday, August 14, a week before the scheduled start of the fall semester. Joshua L. Jones/Athens Banner-Herald/USA Today Network

A counterprotester raises his hands in front of a far-right militia as various militia groups staged rallies in Stone Mountain, Georgia, on Saturday, August 15. Dustin Chambers/Reuters

Joe Biden accepts the Democratic Party’s presidential nomination during his speech in Wilmington, Delaware, on Thursday, August 20. “Here and now, I give you my word: If you entrust me with the presidency, I will draw on the best of us, not the worst,” Biden said. “I’ll be an ally of the light, not the darkness. It’s time for us — for we the people — to come together.” Andrew Harnik/AP
People gather in Minsk, Belarus, to protest the results of the country’s presidential election on Thursday, August 13. Independent observers have criticized the country’s election for not being free or fair. President Alexander Lukashenko, who has been in power for 26 years, is facing renewed waves of pressure from inside and outside the country. Sergei Grits/AP

People relax under umbrellas on the Spanish island of Gran Canaria on Wednesday, August 19. Emilio Morenatti/AP

Members of the media are spread out from one another before US Sen. Kamala Harris, the Democratic vice presidential nominee, delivered her convention speech in Wilmington, Delaware, on Wednesday, August 19. Stefani Reynolds/Bloomberg/Getty Images

A traveler waits to board a high-speed train in Shanghai, China, on Wednesday, August 19. Lintao Zhang/Getty Images

Formula One driver Lewis Hamilton throws his trophy in the air after winning the Spanish Grand Prix on Sunday, August 16. Clive Mason/Formula 1/Getty Images
President Donald Trump arrives at a New York hospital to visit his ailing brother, Robert, on Friday, August 14. Robert Trump died the next day at the age of 71. Jim Watson/AFP/Getty Images

A woman gets her temperature checked during a coronavirus screening in Mumbai, India, on Tuesday, August 18. Indranil Mukherjee/AFP/Getty Images

A Davis High School football coach helps his players warm up before a game in Herriman, Utah, on Friday, August 13. It was the first regular-season football game in the United States since the start of the coronavirus pandemic. George Frey/Reuters

The Democratic presidential ticket — US Sen. Kamala Harris and Joe Biden — sign paperwork Friday, August 14, to officially get on the ballot in all 50 states. Adam Schultz/Biden for President

Audience members look down on a sandy stage as they watch the beach opera “Sun and Sea” in Zurich, Switzerland, on Thursday, August 13. Ennio Leanzo/Keystone/AP

President Donald Trump and his wife, Melania, walk down the steps of Air Force One after returning from a weekend trip on Sunday, August 16. Susan Walsh/AP

Athletes compete in a 5,000-meter race during a Diamond League track meet in Monaco on Friday, August 14. Matthias Hangst/Pool/AFP/Getty Images

Indigenous Brazilian protesters block a major highway near the city of Novo Progresso on Monday, August 17, demanding health assistance, medical supplies and food to fight the Covid-19 pandemic. They also demanded the end of deforestation and illegal activities in their territories. See last week in 45 photos Lucas Landau/Reuters