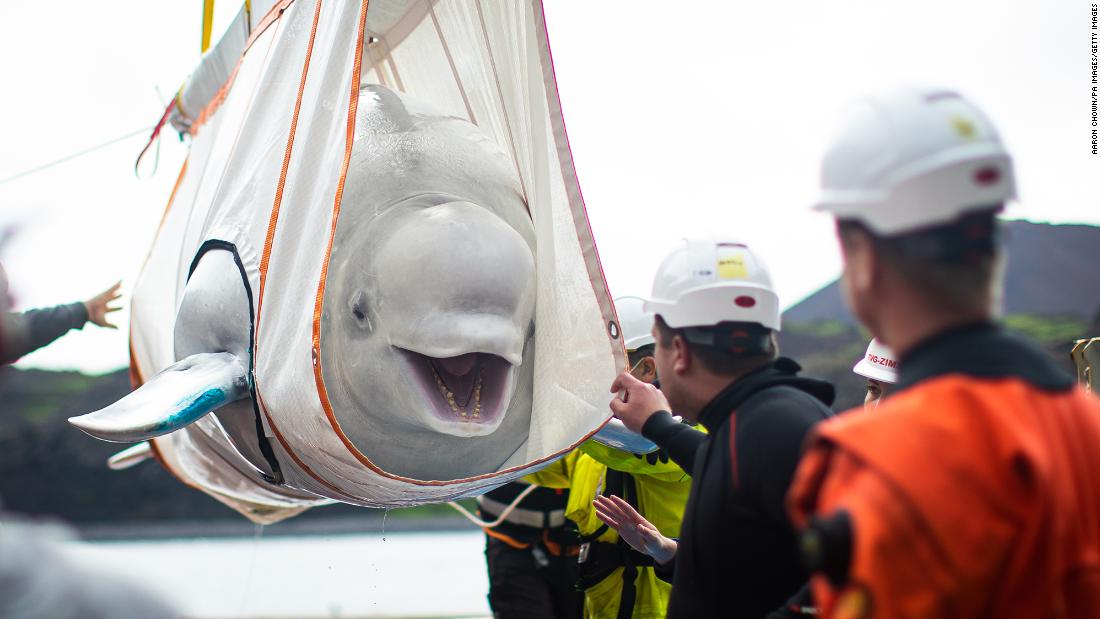 Joe Biden, the presumptive Democratic presidential nominee, calls US Sen. Kamala Harris from his Delaware home to inform her that she was his choice for vice president on Tuesday, August 11. She is the first Black woman and the first person of Indian descent to be tapped for a major political party’s ticket. Adam Schultz/Biden for President
A man scoops away oil Saturday, August 8, that leaked from the MV Wakashio, a wrecked ship off the southeast coast of Mauritius. The vessel ran aground in late July, and the island nation is facing an environmental emergency as oil spills into the Indian Ocean. Jean Aurelio Prudence/L’Express Maurice/AFP/Getty Images
A beluga whale named Little Grey is transferred to a pool at an open-water sanctuary in Iceland’s Klettsvik Bay on Monday, August 10. After years in captivity, Little Grey and another beluga named Little White are returning to the sea for the first time since 2011. Aaron Chown/PA Images/Getty Images
Three homes were reduced to rubble after a gas explosion in Baltimore on Monday, August 10. Two people were killed and seven were injured. Julio Cortez/AP
Children in Chillicothe, Ohio, attend their first day of school on Monday, August 10. Masks were one of many precautions put in place to help limit the spread of the novel coronavirus. Robert McGraw/Chillicothe Gazette/USA Today Network
Hong Kong media tycoon Jimmy Lai, known for his support of the city’s pro-democracy movement and criticism of China, pushes through the media after being released on bail on Wednesday, August 12. Lai had been arrested on suspicion of “colluding” with foreign forces, according to local police. The offense was created by a new national security law imposed on Hong Kong by Beijing last month.  Isaac Lawrence/AFP/Getty Images
Pro golfer Collin Morikawa reacts as the lid falls off the Wanamaker Trophy on Sunday, August 9. Morikawa had just won the PGA Championship, his first major title, at TPC Harding Park in San Francisco. Sean M. Haffey/Getty Images
People watch Sam Fender perform at a socially distanced concert in Newcastle, England, on Tuesday, August 11. Groups of up to five people were spaced out on raised metal platforms. Owen Humphreys/PA Wire/AP
A coronavirus victim is lowered into the ground during her funeral in New Delhi on Friday, August 7. India recently recorded more than 2 million total coronavirus cases, only three weeks after announcing it had hit 1 million confirmed infections. Only Brazil, India and the United States have reported more than 2 million cases. Adnan Abidi/Reuters

Virginia Posny, 99, receives balloons as she gets her associate’s degree from the University of Wisconsin-Stevens Point on Monday, August 10. It was discovered that Posny earned enough credits in 1939-40 to earn the degree. Gary C. Klein/The Herald Times Reporter/USA Today Network

A man swims near a gull at London’s Hampstead bathing ponds on Monday, August 10. Toby Melville/Reuters

A herd of goats walks past a parked bus in Kolkata, India, on Monday, August 10. Bikas Das/AP

A person surveys damage from the roof of College Church after a severe storm toppled the church’s steeple in Wheaton, Illinois, on Monday, August 10. Mark Hume/Chicago Tribune/Tribune News Service/Getty Images

Democratic presidential candidate Joe Biden and his running mate, US Sen. Kamala Harris, walk out for their first campaign event together on Wednesday, August 12. Carolyn Kaster/AP

San Francisco’s Mike Yastrzemski dives toward third base after hitting a triple during a Major League Baseball game in Houston on Wednesday, August 12. David J. Phillip/AP

Oil leaks Friday, August 7, from the MV Wakashio, the wrecked ship that recently ran aground off the southeast coast of Mauritius. Eric Villars via AP
An Air India Express plane crashed in the South Indian state of Kerala on Friday, August 7, after skidding off a runway and breaking into two while landing. At least 18 people died in the crash, including both pilots. Xinhua/Getty Images
Women march in Minsk, Belarus, on Wednesday, August 12. It was the fourth day of demonstrations following the contested re-election of longtime President Alexander Lukashenko. Authorities in Belarus say 6,700 people have been arrested and at least one person has been killed in the violent aftermath of the election, a contest that independent observers have criticized as neither free nor fair. AP
US President Donald Trump signs executive orders extending coronavirus economic relief on Saturday, August 8. It came after Democrats and the White House were unable to reach an agreement on a stimulus bill. Jim Watson/AFP/Getty Images

Protesters stormed several government buildings in Beirut, Lebanon, on Saturday, August 8. The foreign ministry, the environment ministry and the economy ministry were occupied by angry demonstrators who called for the downfall of Lebanon’s ruling elite. Thibault Camus/AP

People cool off at a lake in Haltern am See, Germany, on Friday, August 7. Ina Fassbender/AFP/Getty Images

Washington’s Myisha Hines-Allen, bottom, reaches for a rebound during a WNBA game against the Indiana Fever on Sunday, August 9. Ned Dishman/NBAE/Getty Images

A pig enjoys a jet of water at a farm in Münster, Germany, on Monday, August 10. Caroline Seidel/DPA/Zuma Press

Blanca Ortiz, 84, celebrates after learning from nurses that she will be dismissed from the Eurnekian Ezeiza Hospital near Buenos Aires, Argentina, on Thursday, August 13. Ortiz was admitted several weeks earlier with Covid-19. Natacha Pisarenko/AP

People look at the carcass of a Bryde’s whale that had washed up on a beach in Cape Town, South Africa, on Monday, August 10. Rodger Bosch/AFP/Getty Images

Emmanuelle Lteif Khnaisser, who was in labor at the moment of the Beirut explosion last week, holds her newborn baby, George, at her home in Jal el Dib, Lebanon, on Wednesday, August 12. Hannah McKay/Reuters
Yogi Dalal hugs his daughter, Jigisha, after the family’s store was vandalized in Chicago on Monday, August 10. More than 100 people were arrested in Chicago after an overnight fit of violence that appears to have begun with police exchanging gunfire with a 20-year-old man, Police Superintendent David Brown said. Those arrested were charged with looting, disorderly conduct, and battery against police, Brown said. Charles Rex Arbogast/AP

Lightning is seen above the Pudong financial district in Shanghai, China, on Monday, August 10. Aly Song/Reuters

A couple jumps from a diving platform in Lake Geneva, near the Swiss village of Lutry, on Sunday, August 9. See last week in 40 photos Fabrice Coffrini/AFP/Getty Images