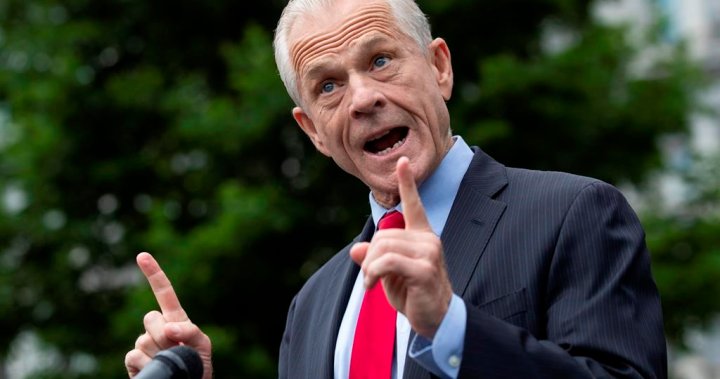 Referring to Canada’s troops in Afghanistan, Donald Trump’s pal and White House trade adviser Peter Navarro has told CNN that “every time that a Canadian shows up in a uniform, it’s doing us a favour? …Or were they brought into the idea they needed to do that as part of the global effort against terrorists?”

Navarro’s comments about Canada and Afghanistan were grossly uninformed and disrespectful and were not really about the Canadian military but part of an ongoing argument he has been having with Ottawa over trade.

What he had to say triggered a storm of criticism from Canadians justifiably irked about his opinion of our 12-year commitment to the war in Afghanistan and the many thousands of Canadians who fought and the 158 Canadians who died over there.

Sure, Navarro is right. Canada did the U.S. a favour by going to Afghanistan. What he chose not to explain — or does not know — was that the U.S. asked its northern neighbours for help after Al Qaeda’s murderous attacks on the Twin Towers and the Pentagon. Once the Canadians reached Afghanistan, their presence there was no longer about the favour that had been asked of their country. It was all about fighting terrorism and trying to make the country a better place for Afghans to live.

The initial American request was that NATO allies help them go after terrorists in the sanctuaries that the Taliban provided for Osama bin Laden’s jihadis in Afghanistan.

Canada’s first move was to dispatch half a dozen warships from Nova Scotia and British Columbia to the Middle East. There, under the command of then Commodore Drew Robertson, and working with warships from several countries including the U.S., they helped to interrupt arms shipments to Afghanistan and the movement of drugs from there that were used to finance Al Qaeda and the Taliban. They also hunted for Al Qaeda members fleeing the fighting in Afghanistan by sea from Karachi, Pakistan.

0:30
U.S. Secretary of Defense remarks on the country’s purpose in the war in Afghanistan

U.S. Secretary of Defense remarks on the country’s purpose in the war in Afghanistan

A short time later, Canadian Joint Task Force II commandos were sent to South Asia and a battalion from the Princess Patricia’s Light Infantry joined the U.S. Army’s 101st Airborne Division in Kandahar. About a year later, after Prime Minister Jean Chretien decided he wanted nothing to do with the U.S.’s war in Iraq, he unexpectedly announced that instead troops would be sent to establish a base at Camp Julien, just outside Kabul.

I spent several years living with Canadian and American troops in Kabul and Kandahar and was a frequent visitor to the U.S.-led International Security Assistance Force headquarters in the Afghan capital. Americans I spent time with in chow halls, war rooms and on the field were almost uniformly complimentary about their Canadian comrades-in-arms.

Read more:
COMMENTARY: Canada’s war in Afghanistan was complicated, but it was no failure

The best proof of the high regard that the Americans had for the Canadians in Afghanistan was that alone among dozens of NATO countries with troops in Afghanistan, Canada was the only one whose generals were entrusted with U.S. army combat troops. During the last few years of Canada’s time in Kandahar, then Brig-Gen. Jon Vance and then-Brig.-Gen. Dean Milner oversaw the combat operations of several front-line U.S. battalions.

It was this close collaboration that Maj. Gen. Simon Hetherington, who retired from the Canadian army last year, served three staff and command tours in Afghanistan, was referring to in a tweet on Wednesday. “I spent 4 yrs in the US on exchange with US Army and as Cdn Defence Attache in DC (Washington),” Hetherington wrote. “Never heard anything but respect for Canada’s service in Afg, particularly from those in US uniform, from young NCOs up to the Chairman of Joint Chiefs.”

That the Americans and Canadians worked closely together was underlined by a meeting I attended in 2010 Panjwaii that was presided over by Vance and NATO’s top soldier in Afghanistan at the time, Gen. David Petraeus. Discussed in detail were secret joint Special Forces missions. Operations involving the two countries were utterly seamless. There was absolutely no hint that were tensions, let alone frictions.

Another American four-star general, Stanley McChrystal, told me a few months before that he was so taken with Canada’s “ink spot” strategy plan, which placed small numbers of troops in Afghan villages, that he had directed American commanders to copy Canada’s plan.

When the U.S. and Britain needed additional transport to fly assault troops into “hot” landing zones during a major offensive operation in Marjah in the province of Helmand, Canada was the only other country to step up, providing seven helicopters.

Frankly, the only negative opinion I ever heard about Canada from American troops over there was the wish that our army was larger. They wanted more Canadians serving alongside them.

Navarro obviously knows nothing of what he speaks.