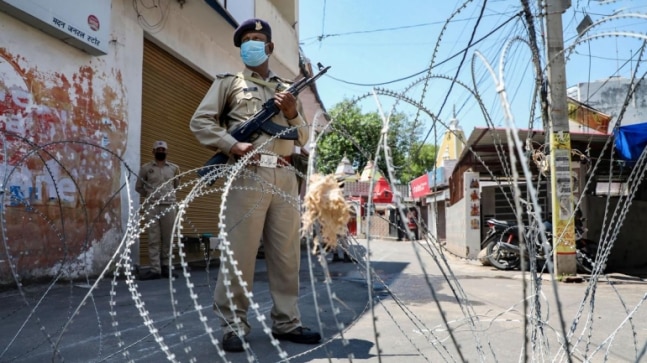 Najar is the third BJP worker targeted by militants within the past one week and the second one to get killed. Earlier, a BJP leader was killed and another injured in south Kashmir’s Kulgam district.

A police official said militants had fired upon Abdul Hamid Najar, a resident of Mohiendpora area of Budgam in central Kashmir on Sunday. (File photo: PTI)

A Bharatiya Janata Party (BJP) worker from Jammu and Kashmir who was shot at by militants on Sunday morning reportedly succumbed to injuries on Monday morning.

A police official said militants had fired upon Abdul Hamid Najar, a resident of Mohiendpora area of Budgam in central Kashmir on Sunday while he was on a morning walk.

In the incident, Abdul Najar received bullet wounds in his abdomen and leg, however, he was immediately shifted to SMHS hospital for treatment, where he succumbed to injuries this morning.

Najar is the third BJP worker targeted by militants within the past one week and second to be killed. Earlier, a BJP leader was killed in Qazigund and another injured in south Kashmir’s Kulgam district.

There have been a series of such attacks on BJP workers in the valley in the past few months. Last month, a BJP leader was assassinated along with two of his family members in Bandipora.

These attacks have created an atmosphere of fear among party workers. As a result, many of them have been tendering their resignations publically.

Hours after Abdul Hamid Najar was shot by militants, four BJP leaders in Jammu and Kashmir‘s Budgam resigned from the party on Sunday.

Political workers in Kashmir Valley are under rising threat from anti-state actors. BJP leader Wasim Bari and Congress Sarpanch Ajay Pandita were killed in attacks in July and June respectively earlier this year.