Pakistan’s new map showing parts of India in its territory has already been described as a political absurdity by New Delhi, but it seems there is something that Pakistan is hiding.

The Survey of Pakistan site, a national surveying and mapping organization of the country, was inaccessible to Indian IP addresses to find the authenticity of the maps unveiled by Imran Khan and published by mainstream media in Pakistan.

Here is why Pakistan’s claims are nowhere near reality.

Pakistan is nowhere near Siachen Glacier

India physically holds 267 thousand hectares of Siachen Glacier and areas around and Pakistan has no possession of it.

The Line of Control (LOC) marked on the new map should logically indicate areas controlled by Pakistan.

Instead, the LoC on Pakistan’s new map runs North East from the NJ-9842 up to the Karakoram Pass.

The areas beyond NJ-9842 – the Northernmost demarcated point of LoC – North West from this point up to Indira Col at a height of 18,911 feet, India’s northernmost point are held by India physically. 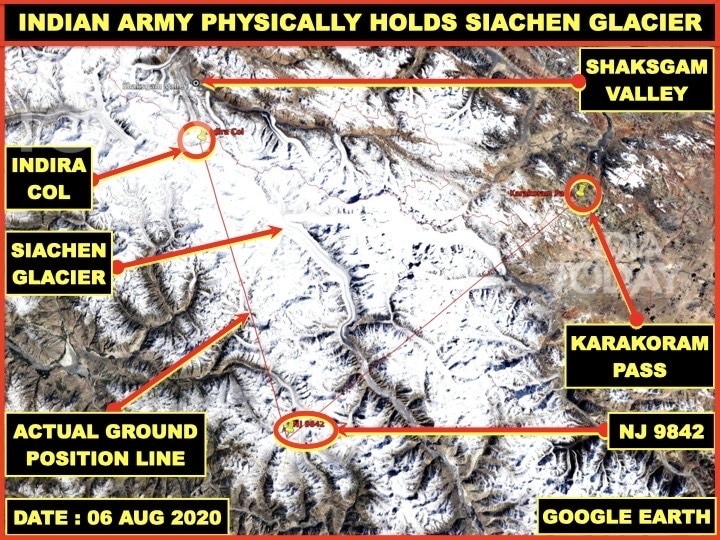 India took control of the Siachen Glacier in 1984 in ‘Operation Meghdoot’ carried out by the Indian Army.

Obviously, Pakistan’s claim of controlling this area are imaginary.

Pakistan’s move comes exactly a year after India scrapped Article 370, that gave special rights to Jammu and Kashmir, from the Indian Constitution. Pakistan was jolted with the unexpected decision and had been openly opposing the abrogation of Article 370 since then.

The timing of Pakistan’s new political map is more interesting as it comes amid the standoff between India and China in Eastern Ladakh, that has been going on for three months now.

The areas beyond Karakoram Pass are also claimed by Pakistan in its new map.

Until now, Pakistan had never claimed the areas of Ladakh because of its demographic dispensation. Locals there follow Buddhism and not Islam and hence the aversion.

However, now Pakistan’s political map indicates that it has claimed areas of Ladakh up to Finger 8 in Pangong Tso area.

Beyond the Finger 8 area of Pangong Tso, the new map mentions “Frontier Undefined” with a caveat printed saying “Final status to be decided in line with relevant UNSC resolutions”.

Pakistan’ government’s claim on Ladakh seems to be part of a tacit agreement with China as there has been no objection raised by Beijing.

The new Pakistan map has a special square superimposed which supposedly shows Gujarat’s Junagarh and Manavadar as part of Pakistan.

The areas of Diu and Mendarda have been excluded from being part of Pakistan.

This probably has a historical background of certain areas that belonged to the erstwhile state of Saurashtra.

The Survey of Pakistan’s staff needs to undertake more studies to understand which parts within Junagarh, a princely state in India at the time of partition, belonged to Saurashtra. Until then, the joke is on them and Pakistan.