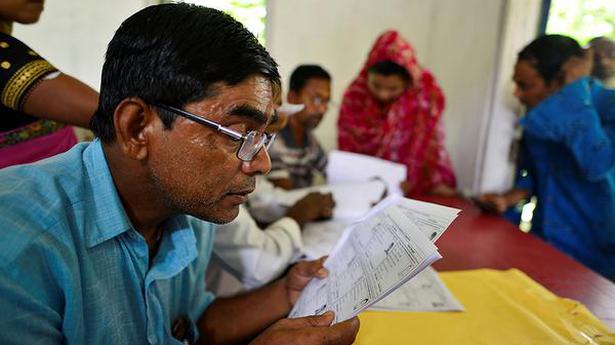 [The Hindu]Morning Digest: 19 lakh NRC-excluded stuck in limbo; Lakhs of people affected by floods in central India, and more

[The Hindu]Morning Digest: 19 lakh NRC-excluded stuck in limbo; Lakhs of people affected by floods in central India, and more

A year after the publication of the complete National Register of Citizens (NRC), the fate of 19,06,657 people excluded from the updated list in Assam continues to hang in the balance. The ongoing COVID-19 crisis and the floods in between have been blamed for the delay in the process of issuing rejection slips to each of the excluded, citing the reasons why they were left out.

Over 14 lakh people were affected due to floods in five river systems of Odisha, said the State government here on Sunday. Seventeen people have lost their lives due to wall collapse and by slipping into swollen rivers. In Madhya Pradesh, more than 11,000 persons stuck in floods in the southern and the western parts had been rescued in the past two days by the Army, Air Force and disaster response forces, said Chief Minister Shivraj Singh Chouhan on Sunday.

As India heads towards completing six months of being in virtual mode and restricted mobility because of the COVID-19 pandemic in September, the Parliamentary Standing Committee for Home Affairs is examining the impact of the lockdown on citizens’ mental health.

The Department of Personnel and Training (DoPT) has issued a notification on review, consolidation and reiteration of the guidelines on premature retirement of government servants, clarifying that under the rules, it is distinct from “compulsory retirement” and is not a penalty.

Three unidentified militants and a police officer were killed in a night-long operation of the security forces near Srinagar on Sunday. An official said one militant was killed on Saturday night and two others were gunned down on Sunday morning.

India and Russia are the online Chess Olympiad champions. The two finalists were declared the joint winners by the world chess governing body FIDE after at least two games in the second match were affected by internet connectivity issues.

Prime Minister Narendra Modi on Sunday called upon start-ups and entrepreneurs to “team up for toys”, pointing out that India’s share in the ₹7 lakh crore global toy market is minuscule. He asserted that the country has the potential to be a hub for the industry.

The Congress on Sunday asked Prime Minister Narendra Modi to tell the upcoming session of Parliament what steps the government has taken to protect the country’s border in the wake of the growing hostility with China. Addressing a virtual press conference, Congress spokespersons Rajeev Shukla and Gaurav Gogoi, referred to a news report that the China troops have gone in for massive build up of its troops and installed missile systems near Doka La and Naku La in the Sikkim region.

Away from school since March, when a nationwide lockdown was imposed, 12-year-old Vijay Bheel is stuck in time and learning: he still believes Congressman Kamal Nath is in power.

In the five years in between Shinzo Abe’s first stint as Prime Minister — a short-lived one-year term in office that ended in 2007 and his coming to power in 2012, Japan had seen five different Prime Ministers. It’s that sense of stability now that may represent Mr. Abe’s greatest contribution to Japan’s politics — both domestic and in the field of its international relations.

England captain Eoin Morgan smashed 66 runs off 33 balls to help his side to a five-wicket win over Pakistan in the second Twenty20 international on Sunday. Pakistan scored a challenging 195-4 after losing the toss at Old Trafford before England finished on 199-5 in 19.1 overs.