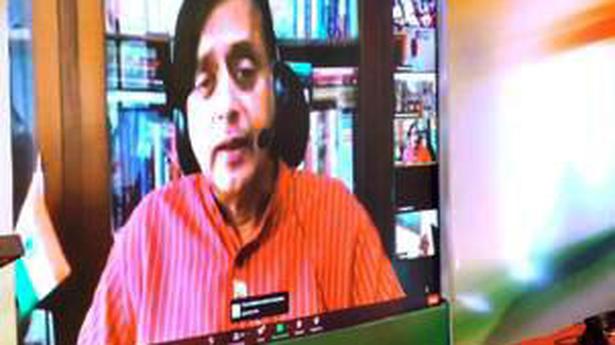 [The Hindu]‘PV deserved Bharat Ratna for his foreign policy’

[The Hindu]‘PV deserved Bharat Ratna for his foreign policy’

[The Hindu]Violent clashes in Jammu, protests in Valley over eviction of locals from ‘encroached State land’

The way in which P.V. Narasimha Rao skilfully managed global alliances while considering the impact of various domestic factors such as separatist movements, as well as economic reforms on our foreign policy, was praised by Congress MP and former Union Minister of State for Foreign Affairs Shashi Tharoor.

PV brought about the necessary changes to ensure that India was recognised as a major power. The paradigm shift was improving ties with Israel even while winning the confidence of the Arab nations. Another big step was bringing India closer to the USA, bolstering economic and political ties, when Russia was still struggling with its post-cold war issues.

The Look-East policy of his had made a huge impact on the Indian economy, he said and recalled how the South East Asia nations had become important economic partners in India’s growth. All his experience as a foreign minister had helped him push through the foreign policy reforms without annoying world or domestic powers.

On relations with China, Mr. Tharoor said PV was successful in engaging China in separating the economic cooperation with border issues. He had his impact on SAARC nations, ensuring that India was a dominant partner, yet a friendly one.

To a question on whether India’s growing closeness to the USA impacted its relations with Russia, he agreed to a certain extent, saying even our neighbours were no longer that friendly. Relations with even Bangladesh were a bit strained as it was miffed by a BJP leader who had termed the country ‘like a termite’.

But, Mr. Tharoor said, it was unfair to blame Prime Minister Modi alone as certain geopolitical issues too contributed to the strained relations. Today Russia considered China a better partner for its trade and, obviously, moved closer to Pakistan along with it. “However, being a bigger nation and a bigger economy, we need to infuse confidence among the neighbouring countries that India was willing to give more than it wants to take.”

Attributing India’s global presence as a major economic power to PV Narasimha Rao, he recalled how the world media had written off India and said the country had been on the verge of economic collapse before he took over as Prime Minister.

To take a leap from the shameful phase of depositing Indian gold reserves to the present position, it was the economic vision and liberalisation policies of PV and Manmohan Singh, he said. For his skilful management of alliances and courage to introduce bold economic reforms, he deserved the coveted Bharat Ratna, Mr. Tharoor said.

[The Hindu]Violent clashes in Jammu, protests in Valley over eviction of locals from ‘encroached State land’

[The Hindu]J&K admin keeping watch, not Joshimath-like situation: L-G over cracks in structures in Doda