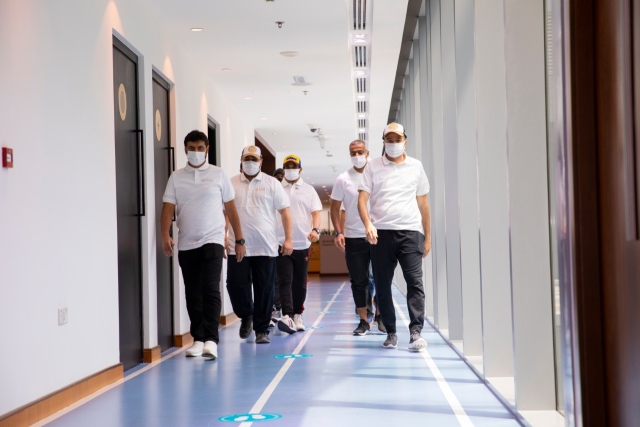 [UAE Today]A great turnout to participate in “Our Steps Together” to support the Special Olympics … and 2.5 million steps in the first day

[UAE Today]A great turnout to participate in “Our Steps Together” to support the Special Olympics … and 2.5 million steps in the first day

The UAE Special Olympics, headed by Shama Al Mazrouei, Chairman of the Board of Trustees, and the regional presidency of the International Special Olympics headed by Eng. Ayman Abdel Wahab, seeks to support the Special Olympics movement and people of determination with mental challenges, which is the largest global humanitarian movement concerned with people with intellectual disabilities in sports, social, health and education, in various countries. the world.

The participations witnessed a great diversity of the participating nationalities residing in the UAE and abroad. It is expected that the number of participants will expand from three thousand to double in the coming days. With the start of the pedometer, the first day of the start of the challenge closed, achieving two and a half million steps. The largest number of steps that William achieved, amounting to 33,139 steps, followed by Chevy, achieving 30 thousand and 164 steps, two numbers that exceed three times the natural steps that the average person achieves in one day, which are defined as ten thousand steps. The first day witnessed the investigation of Farouk Al-Masry 15,954 steps, the Palestinian Grimm 10741, the Bahraini Suleiman 6914, and the Jordanian Muhammad Mahmoud 6126. The ages of the participants varied, and the first place was occupied by the age group from 30 to 40 years, then from 40 to 45 years, and from 25 to 30, and 18 Up to 25 years old and also under 18 years old.

The chart of participants from various countries of the world revealed an unparalleled turnout from the Emirates, along with other countries from India, England, South Africa, Egypt, Saudi Arabia, Bahrain, Pakistan, Jordan, America, Yemen, Lebanon, Palestine and Oman in addition to other countries. The steps that have been achieved are announced at the end of each day, taking into account the time differences between different countries of the world, so that by the end of the tenth day, it reached 52 million steps.

The initiative (Our Steps Together) is sponsored by Bin Aziz Company, and it celebrates the 52nd anniversary of the establishment of the International Special Olympics movement in the world, which has contributed since 1968 to changing the lives of millions of people of determination with intellectual disabilities and their families, and helped in the acceptance and integration of different societies. So far, the movement includes 6 million players from 192 countries.

The National Director of the Special Olympics Foundation of the United Arab Emirates, Talal Al-Hashemi, said in a press statement: We invite all individuals and institutions who have not yet registered to join us to support reaching 52 million steps. Community solidarity is what we aim for to give 100 Special Olympics athletes home sports equipment and 10 clubs and owners centers Determination is a specialized sports equipment. ”It is mentioned that individuals and institutions can participate in the challenge through the (www.inphota.com) platform.

[UAE Today]Khalifa.. Khaled’s legacy of giving in all parts of the earth