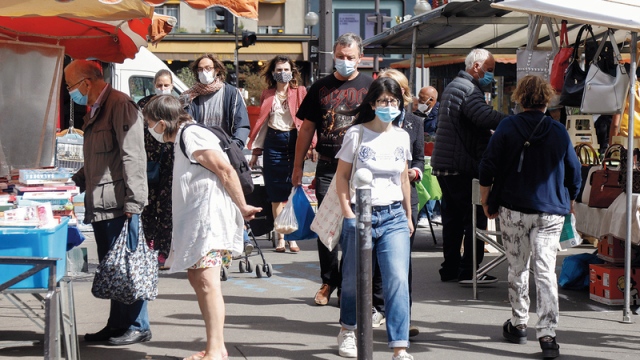 More than 24.61 million people have been infected with the emerging coronavirus worldwide, and 832,804 people have died from the virus. While India recorded a new increase in daily cases of the virus, a Chinese pharmaceutical company began searching with several countries to allow testing of its vaccine against the Corona virus, which it is developing.

According to a Reuters count, more than 24.61 million people have been infected with the Coronavirus worldwide, and 832,804 people have died from the virus.

HIV infections have been recorded in more than 210 countries and regions since the first cases were discovered in China in December 2019.

India announced the registration of 76,472 new cases of Coronavirus, yesterday, which is slightly less than the records it has witnessed over the past two days, but the numbers continue to increase, making the virus outbreak there the worst in the world at the present time.

India recorded 3.46 million cases during the pandemic, being the third in the world in terms of the number of infections, after the United States and Brazil. But India surpassed the two countries in the number of daily infections for nearly two weeks.

The death toll increased by 1,021 to reach 62,550 people, according to Federal Ministry of Health data, although local media indicated that some restrictions imposed on movement within the country could be eased as of this week.

In Russia, the death toll from the new Corona virus, yesterday, exceeded the 17,000 mark, after 111 new cases were recorded within one day, bringing the total number to 17,025 deaths.

And the Special Operations Room to combat Coronavirus in Russia announced – in its daily report – that the number of new infections has increased during the past 24 hours, recording 4,941 infections compared to 4,829 the previous day, bringing the total number of infections to 985,346 cases, in addition to 5917 cases of recovery during the past 24 hours. , Bringing the total of those recovered to 804,383 people, bringing the number of active cases to 163938, as 25.7% of the new infected people did not show symptoms of the disease.

Meanwhile, the Chinese pharmaceutical company, Can Sino Biology, is in talks with many countries to allow a trial of its vaccine against the Coronavirus, which it is developing on small groups of people before completing large-scale safety and efficacy experiments, according to Bloomberg News yesterday, quoting From the Wall Street Journal.

The company is holding talks with Pakistan, many Latin American countries and some developed countries, according to the newspaper, according to Pierre Morgon, the vice president of the “international activity” department of “Can Sino” company.

The report said that doses can be used by health care workers and other medical personnel, if emergency approval is granted, adding that no one has agreed to allow it yet.

The report added, citing a company file, that the Chinese army allowed the use of the “Kan Sino” vaccine before completing the final, large-scale tests.

The Tian Sino-based company had emerged as one of the fastest companies to manufacture a vaccine last May, when it became the first company to publish a complete scientific study of its early human trials, a crucial step given that it allows researchers to assess the pharmacological potential of the product.

Russia passes the barrier of 17,000 deaths from Corona, and India records an increase in injuries.