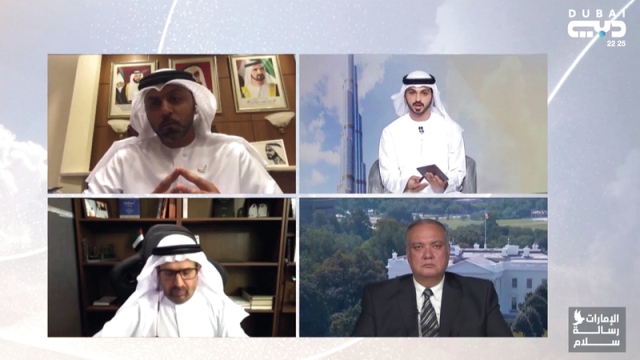 As part of its media keeping up with the peace treaty between the UAE and Israel, the program (Emirates Message of Peace) hosted in its third episode Thursday evening on Dubai TV, the Chairman of the Defense, Interior and Foreign Affairs Committee of the Federal National Council, Dr. Ali Rashid Al Nuaimi, and the country’s ambassador to the Islamic Republic of Pakistan Hamad Al-Zaabi, a journalist specializing in American and Middle Eastern affairs, Ihab Abbas from Washington.

Emirati journalist Muhammad al-Kaabi, presenter of the third episode of the program, said, “The UAE has a quiet diplomacy, a broad horizon, and a generous source. Sovereignty and establishing relations with Israel is a sovereign decision that belongs to every country as long as it does not represent the Palestinians and does not speak in the name of anyone, and it is not a secret that the UAE felt that the policy of boycott and boycott did not achieve neither the interest of the Palestinians nor the interest of the Arabs, and that is why it chose a peace-based approach to address the outstanding problems in A different climate, and it is true that the UAE stopped the annexation decision, but it is alerting the Palestinians, as wasting more time may result in wasting more land.

Regarding the description of the American writer and journalist, “Verdman” in the “New York Times” newspaper, that the peace agreement signed between the UAE and Israel will extend its influence to the entire region, and affect all the main players in it as a geopolitical earthquake, Dr. Ali Rashid Al-Nuaimi «What happened is indeed an unprecedented earthquake in the region, and contradicts what people are accustomed to in terms of tools, mechanisms and political discourse that have drawn up the generations present in this region over the past 70 years, and what the UAE has done is a kind of shock, and here I say with pride The Emirati leadership had a forward-looking vision and aspired to strive for the better and create a better future. ”He added,“ I remember here a word by His Highness Sheikh Mohammed bin Rashid Al Maktoum, Vice President and Prime Minister of the UAE and Ruler of Dubai, which he said at the first government summit, addressing the Arab rulers: Either you change Or you will be changed, and we are today in the same position when His Highness Sheikh Mohammed bin Zayed Al Nahyan took a courageous decision that some people did not understand, but after a while I am sure that it will be absorbed.

On the impact of the peace treaty, Al-Nuaimi stressed that what the UAE has done is called “repositioning” as a regional power that has appreciation and stature on the world stage, explaining, “At a time when the initiative of His Highness Sheikh Mohammed bin Zayed Al Nahyan found blessings from all countries of the Arab world without Except for the Qatari system, as I found blessings from all countries of the Islamic world except for the Turkish and Iranian regimes, in addition to the blessing of all the active leaders in the international community, and we now expect that this initiative will open new horizons for the UAE in various sectors and areas of future industry in terms of Security, stability, prosperity and prosperity for the whole region. The UAE can also be considered a model for Arab and Israeli youth. We want it to be repeated and taken up in the region as a whole.

And concluded d. Al-Nuaimi said, “I think that this matter is called a historic achievement, and for us in the Emirates and the Arabs it is a strategic choice that we must employ in the right employment, and not hesitate to seize the opportunities that it will provide us in this context.”

In response to a question, can the UAE-Israeli peace treaty be considered a Palestinian-Israeli peace initiative? The UAE ambassador to the Republic of Pakistan said, “I think that the responsibility today rests on the shoulders of the Israelis and Palestinians to reach an appropriate agreement according to their perception and priorities, at a time when the UAE-Israeli peace treaty provided a window of opportunity and a more fertile ground than the past in building a lasting and comprehensive peace in the region, and this The historic achievement that was achieved through the treaty, I think, will create a new opportunity in the region, where there will be many opportunities to achieve peaceful coexistence.

Regarding the tools that Ramallah can exploit to initiate peace in light of the international support for the rights of the Palestinian people, the journalist specializing in American and Middle Eastern affairs, Ihab Abbas from Washington, said, “We are now at a very important and important crossroads. This division has preceded many opportunities in The previous years, when a peace agreement was signed between Israel and some Arab countries, and each time the Palestinian side was not present and it is the most important side in this matter, and this time it seems that the Palestinians decided not to register in this important junction, and perhaps decide the opposite direction, This is surprising, ”he asked,“ Why is there no opportunity for such a large gate that has been opened for the Palestinian leadership to enter and advance in it, and perhaps it is the base upon which much of the restoration of rights for the Palestinian side is built. ”

Al-Nuaimi: “The initiative will open up areas for the UAE to create the future in terms of security, stability and prosperity for the whole region.”

Al-Zaabi: “This historic achievement will create a new opportunity in the region to achieve peaceful coexistence.”